Greyhawk: Return to the Classic 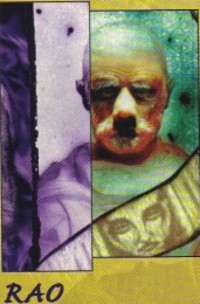 Will be based off of Mahiannah Buddhism. The rituals and temples being modeled after Tibetan Buddhism, this religion came about because of a human adaptation of the religion of the Elves. For sacred language of the faith clerics, paladins, priests and all active members of the church will have the Language: Celestial (Raoian) this will be real life (Indian). Rao (RAH-oh) is the Flan god of Peace, Reason, and Serenity. His holy symbol is a heart-shaped mask with a calm expression, or a simple white heart crafted of metal or wood. His followers are called Raoans.

Rao is often depicted as an old man with bushy white hair, dark skin, slender hands, and a peaceful smile. Any time an offering of peace is made, Rao grows a day younger. With a mere glance, he can cause any being to fall into agreeable calmness; even Nerull is not immune to this. Rao is rarely seen without his Serene Staff, an undersized shepherd’s crook that he wields as a light mace.

Rao is an ally of Heironeous, Pelor, Zilchus, and Saint Cuthbert, and an enemy of Iuz and Incabulos. Rao is served by Zodal, lesser god of Mercy, Hope, and Benevolence. Allitur is said to be his younger brother. Rao treats Saint Cuthbert as a younger brother as well, and he may have originally brought the saint to Oerth from another world. Raoan priests gently chide priests of Zilchus for their worldliness, while clerics of Zilchus claim that Raoans are too idealistic, but there is genuine affection between the two groups.

Rao teaches that the greatest gift is reason, which leads to discourse, which leads to peace, which leads to serenity. For those who refuse to see reason and resort to violence first, action--is required to restore the peace. Sometimes this action is violent, regrettably.

Rao’s priesthood urges their followers to reject strong emotion for the calm and serenity of inner peace. Only when the foundations of law and good are threatened should they take to the battlements. When Raoans are stirred to battle, however, their foes find them a difficult challenge: calm, implacable, and utterly convinced through the power of reason of the righteousness of their cause. Though slow to act, Rao’s followers act surely, carefully, and with great force.

The Word of Incarum, said to be written by Incarum, a deva servitor of Rao’s, is regarded as the primary religious text of the faith.

Rao is most popular in Veluna, where Raoism is the official state religion. Worship of Rao is also heavily concentrated in Furyondy and Bissel. The church of Rao is a significant force in Greyhawk City, though far from the most popular faith. Temples of Rao also exist in Keoland, Gran March, and on the Wild Coast.

The faith of Rao has never appealed greatly to commonfolk; rulers, diplomats, sages, scholars, and philosophers make up the bulk of his faithful outside of Old Ferrond, although Rao’s powerful worshipers have made their deity’s teachings far more influential than mere numbers would suggest. Monks and spellcasters who seek uninterrupted meditation also revere Rao. Many gurus urge their flagging pupils to be as Rao is.

The teachings of Rao have never made great inroads among the Aerdi in the lands of the former Great Kingdom, though wandering Raoan paladins occasionally venture to the war zones there to help return things to the status quo. A Raoan paladin named Karn Serrand rules a fortress called Goldbolt near Chathold. Priests of Rao exist in secret in Rel Deven, where they are forced to lurk in the shadows like the clergy of evil cults.

The order of Rao is divided into three parts: the masses, the priesthood, and the Temple Militant, or Holy Knights of Rao.

Rao’s priesthood seeks knowledge, and prefers peaceful solutions, though they are not above using violence when the situation calls for it. They are mediators and negotiators; the Patriarch of Rao in Greyhawk City (Jerome Kazinskaia) was instrumental in negotiating the end of the Greyhawk Wars. They search for new schools of thought, fabled places of peace and quietude, and powerful magic to use to further Law and Good. The most powerful cleric of Rao in the Flanaess is Canon Hazen of Veluna, who helped activate the Crook of Rao and bring about the Flight of Fiends.

The Raoan clergy is predominantly male. They are quiet, studious people. Their motto is There is a time to think, and more rarely to act; but in that time, action is wisdom.

The Holy Knights of Rao include the paladins, who are supported by hundreds of fighters and retainers.

Paladins of Rao are called Envoys or Heralds. Their motto is Peace through Strength of Words and Weight of Reason, but they know that peace must often be won by strength of arms, and do not fear to use their martial as well as their intellectual abilities to bring about the ends they seek.

Rao’s paladins generally go lightly armed and armored, unless expecting the worst. They are serene, patrician figures with spotless manners and erudition. They typically wear gray or blue-gray tunics trimmed in white and gold, and sometimes wear cowls. Rao’s symbol is emblazoned on their chests.

Temples of Rao are generally stately, open-air affairs filled with incense, quiet chanting, and earnest philosophical discussions. Many have extensive libraries and learned sages on hand. Some are magnificent four-sided structures with a tall, thin spire on each corner and one in the center. The largest, such as the one in Veluna City, include flying buttresses.

The walls of the Temple of Rao in Veluna City are 90 feet high, its five towers over 120 feet. Around it and in its courtyards are open gardens of flowers. Stained glass windows provide plentiful interior light during the day.

Raoan services are long, including periods of quiet prayer and lamentation over the many evils of the world.

Raoan holidays are on nights of astrological importance, such as times of eclipse and comet sightings.

Breadgiving Day. On this day, taking place on the 4th of Needfest (the Winter Solstice), Greyhawk’s clerics of Pelor, Rao, and Saint Cuthbert distribute food to the poor.

The Feast of Edoira, a major Raoan holiday within the Domain of Greyhawk, is celebrated on the fourth of Growfest.

The Holy Day of Serenity, on Reaping 10, is celebrated in Veluna as a holy day of Rao, though it’s actually the anniversary of Veluna’s secession from Furyondy in 476 CY. It is celebrated with religious singing and worship.

The Night of Hopeful Judgement, called Dark Night by most peoples, occurs on the night of Goodmonth 11. This night is a particularly holy time for the faith of Rao, as the Book of Incarum states that Rao will cleanse the world of evil on a night when neither moon shines in the sky. Raoans believe that it is during this night that Rao leads the souls of the righteous to salvation or damns the unrighteous to their eternal punishment. Those without faith in Rao call this holiday the Night of Hopeful Dawn.

Midsummer’s Night is, in the lunar calendar, the opposite of Dark Night, for it is on this night that both moons shine full in the sky. As such, this is another important time for the faith of Rao.

It has been long since Rao has interfered directly with the affairs of Oerth, but he left behind the Crook of Rao to help banish the forces of evil. Devils and demons are said to shudder at the mere mention of this object. Other artifacts of Rao are said to exist as well, with similar properties against malevolence.

The Cap of Reason was created by the order of Rao long ago to further the cause of peace. Resembling a worn cap made from dented and well-used helms, it has defensive properties against weapons and magic, as well as enchanting the tongue of its wielders to make them more skillful at diplomacy. The church often recreates this item.

The Gift of the Moons

The Book of Incarum states that in the beginning, all humans respected the wisdom and reason of Rao. Then Tharizdun came and tempted them with false promises, and they turned away from reason and embraced evil. Rao took the light of his soul away from them, and the world was plunged into endless night. However, a few repented, and Rao gifted the moons Celene and Luna to the peoples of Oerth in order to light and guide the way from the darkness and tyranny. Then Rao sent the deva Incarum with the Crook of Rao to drive away the fiends of Tharizdun. Rao returned his light to the day, but true peace will not come until a night when neither moon shines in the sky.

One pervasive legend among the paladins of Rao is that of a “man with a swordless scabbard,” who defeats his opponents without the need for a weapon.

Edoira is an ancient priest of Rao who united several argumentative sects of his faith within the Domain of Greyhawk, establishing the Edoiran Compact. The Edoiran Compact is a set of rules by which good-aligned faiths can exist in harmony. Edoira never became a deity, but his memory is still honored by many.

Rao is an old god whose great wisdom was long respected by the Flan peoples. He was historically worshiped by the Flan of the Vale of Luna, most sacred of the lands protected by Rao, as a god of the moons, and his worshipers welcomed the lost and wandering Vollar tribe of Oeridians who came to settle there. The Vollar interpreted this primitive god as a deity of reason and serenity, and by 9 CY, when the Crook of Rao was first located, their cultures had become as one. The location of the Crook’s discovery was called Mitrik, which means “salvation” in the Velondi tongue.

Ascendant campaigns can view previous versions of their pages, see what has changed (and who did it), and even restore old versions. It's like having a rewind button for your campaign.

We've already been saving your edits, so if you upgrade now you will have instant access to your previous versions. Plus, you have our no risk refund guarantee , so there's nothing to lose.

I'm sorry, but we no longer support this web browser. Please upgrade your browser or install Chrome or Firefox to enjoy the full functionality of this site.